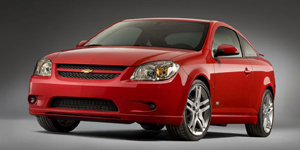 Beginning with 2008 models, side airbags were made standard. Starting with 2009 models manufactured after May 2009, the side curtain airbags of the 2-door models were modified to improve occupant protection in side-impact crashes.
Driver Injury Measures:
Measures taken from the dummy indicate that serious head injuries would be possible in a crash of this severity. The risk of significant injuries to other body regions is low.
Passenger Injury Measures:
Measures taken from the dummy indicate a low risk of any significant injuries in a crash of this severity.
NHTSA CRASH TEST RATINGS
FIND A USED CHEVROLET COBALT
Find the used Chevrolet Cobalt of your choice from a dealer in your area. Search our used car listings now.
CARS FOR SALE
BUY NEW | FIND A DEALER
ENTER ZIP CODE PLEASE
X
ALSO CHECK OUT THESE MODELS
COMPARE SIDE-BY-SIDE
BMW 1-Series
JB's Rating: 4.0
See Pictures »