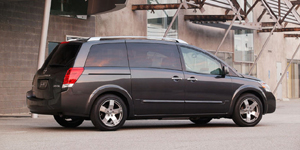 Words like "bold" and "aggressive" rarely come to mind when describing a minivan. Yet when Nissan redesigned the Quest five years ago, that's exactly what critics were calling Nissan's attempt at spicing up an undeniably bland segment. But although the Quest sported unique styling inside and out, as well as a relatively powerful V6 engine and able handling, its polarizing look and lack of functionality compared to its rivals left a bad taste in the mouths of those looking for more out of a family vehicle. Even after a refresh two model years ago, sales of the Nissan Quest have continued to decline. Now the Quest is carrying over yet another year unchanged, which could be an indicator that Nissan doesn't consider the ailing minivan much of a priority. And rumor has it that 2009 could be the Quest's swan song -- the model could be either eliminated or replaced next year.