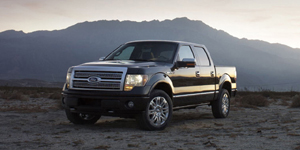 The best-selling vehicle in the US for decades, the Ford F150 is available in over 65 variations, powered by a choice of V8 engines, enabling it to tow more than five tons, if properly equipped.

The Ford F150 enters the 2009 model year completely redesigned and improves on its predecessors strengths. Sporting a more angular exterior, the new F150 still features more than 65 variations, most of which similar to the previous model. New is an exclusively-equipped Platinum trim on Super Crew models featuring unique grille, bumpers, wheel-lip moldings, 20-in. wheels, and interior appointments.