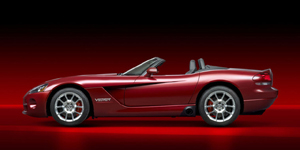 The Dodge Viper is an uncompromised sportscar. Powered by a giant V10, the Viper is loud and massive, its suspension rock hard. The Viper is not very refined, but all the more involving.

For 2008, the Dodge Viper's V10 grows to 8.4-liters and now produces 600hp. Along with the increased power, the gearbox has been strengthened, the shifter revised, the clutch tweaked for more grip on less effort, and the hood has been reshaped.

The 2008 Dodge Viper is available in 2 versions: